Could Raab be the worst barman in Courchevel?
Before I go into too much detail I think we already know the answer to this question. (or just ask Jason).
Since the early departure of Will from the Jump, Raab has been working for the past couple of weeks and even when sober trying to find an apt comparison to his work brings words like ÃÂ¬nutless monkeyÃÂ® to mind.
Great tan beard, crap moustache.
Some people are naturally hairy, others are more folically challenged. Some have 5 oÃÂ­ clock shadows, others a week old patch of peach fuzz. The later group includes young Raab(New Gen), who for the past month has been trying his hardest to grow a tash for mo-march. Despite all his concentration IÃÂ­ve seen girls (sorry girls) with more hair on their upper lip.
A note from the editor
No Bubble or Boulotte in 1650. Reports of Ski Olympic staff leaving resort this weekend. The Jump closing on Wednesday. Resort buses stopping after 7.30pm next week. Courchevel might still have (a little) snow and despite the lifts staying opening for another month the rest of resort looks like itÃÂ­s packing up ready for the summer.
But before we start putting on our bi

An Awkward situation
Life is full of awkward situations. The unwanted erection at the swimming pool, the inappropriate ÃÂ¬lets just be friendsÃÂ® line, asking an obese woman in a doctors waiting room when she is due, Find out your parents are getting divorced on Facebook. You get the general gist but then it wouldnÃÂ­t be life without them. I was recently told of a situation in resort which

The end of the Bosses. 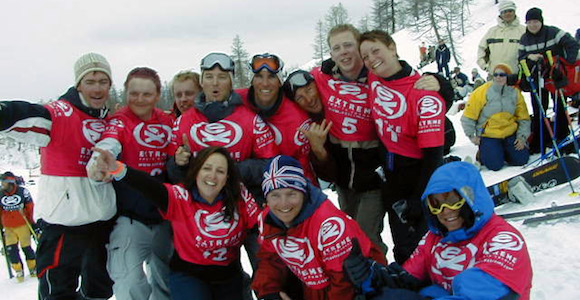 Late last night I received an email from Tom Banfield, the moustachioed Boss des Bosses organiser, explaining that after more than twenty years Compagnie Mont Blanc (Chamonix) had pulled the plug on this historic competition.

Since 2002 Courchevel has entered a team every year with a mixture of results. From winning in 2002 to a string of 6th places it has always been

Kalico undergos a change of state
After a change of management the Kalico has also changed its name. With a little play on words itÃÂ­s now called KU-DE-TA. Hopefully the sign, which looks like it took 5 minutes to make, is only temporary and will be replaced by something more . As you can see (only just) the terrace has also been enlarged and now stretches all the way to the stairs in the Forum meaning i